On this page: What are qualia? - Proof of existence - Books to read

Philosophers have wrestled with the qualia problem for years - yet I managed to solve it in the course of a midnight trip to the local konbini ("convenience store"). Basically the idea is that when we have a subjective experience - suppose we see a red sunset - then there is some sort of reality to the "red stuff" of our subjective experience. One way to understand this possibility is to consider how we know that the setting sun is red, rather than say dark green. Well, obviously, when we were tiny, we saw the setting sun, and saw that it was the same colour as a tomato, and we knew the colour of a tomato was called "red" because we had heard it from our parents. Ah, says the advocate of qualia, we know we all agree on what to call the colour, but we can't know whether we all have the same subjective experience. Perhaps the feeling inside your mind when you see red is actually exactly the same as the feeling inside my mind when I see dark green, and vice versa. In other words, suppose we could have transplant operations to exchange brains. I might be horrified to realise after the operation that you had been seeing the setting sun as dark green and conifers as bright red - of course you had called these "red" and "green" respectively, but only because those were the names you had learnt to give them.

Well, if as a result of an operation someone reported just this switching around of the sensations, that would pretty much clinch it. But it's hard to see how evidence in the opposite direction could ever show definitively that qualia have no meaningful existence, and in practice most discussions of this subject have a distinct whiff of vacuousness to them. Or so I thought...

Could a trip to 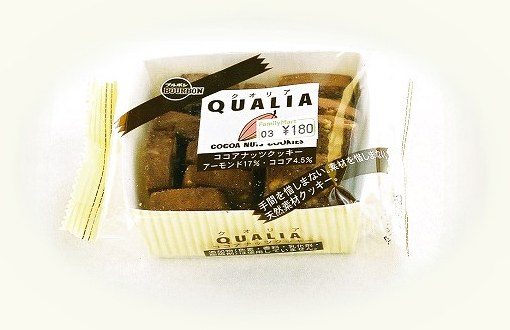 I recommend all of the above books. Probably anything by Hilary Putnam belongs in the red corner too, but I haven't read him yet.

The katakana above the name on the packet makes it clear that the intended pronunciation is kuoria. In other words, the name for these "COCOA NUTS COOKIES" (kokoa natsu kukkii) is actually formed by a standard Japanese process - take an English word, here "Quality", chop some off, and paste something else on.